Every developer knows that a proper framework enables to create applications quicker, safer and more efficiently. Choosing a right framework before building your application is crucial for robustness and success. PHP frameworks are super useful tools for web development, as they are real time-savers when it comes to creation and maintenance of the PHP website.

There are a lot of solid PHP frameworks on the market, so it is probably hard to choose one. We have gathered a list of the best PHP frameworks currently on the market and share our insights in finding the best one for your application. Every framework has its own advantages as well as disadvantages, so if you have a preferred Framework by which you work with aside from the ones listed here, please do let us know by dropping us your feedback in the comment section below. 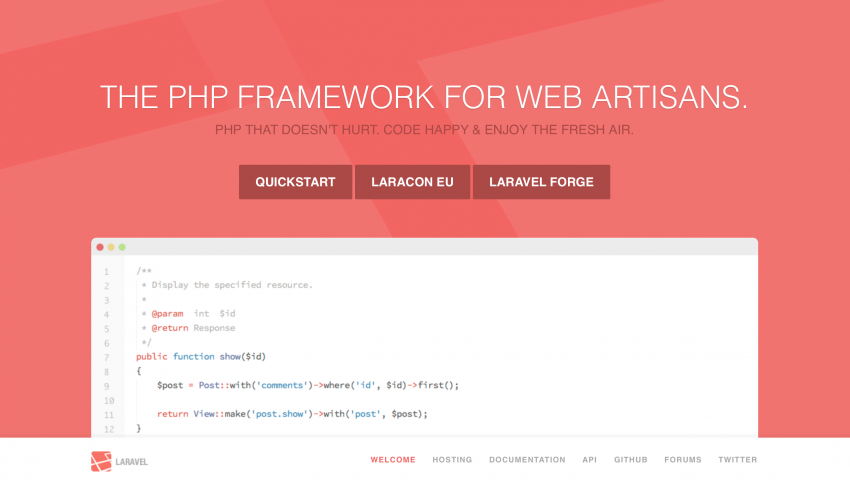 Laravel is a free, open source PHP Web application framework, designed for developing MVC web applications. In our opinion, Laravel is the best overall PHP framework of 2014. I personally believe that Laravel has taken PHP frameworks to the whole new level. Laravel helps you create wonderful applications using simple, expressive syntax, aiming to take the pain out of web development by easing common tasks, such as authentication, routing, sessions and caching. Laravel is well readable and well-documented that helps you speed up your coding. Laravel makes development easy and more creative for developers and lets them produce some outstanding result with it. With Composer you can manage all your application’s third-party packages, and works great on MySQL, Postgres, SQL Server, and SQLite.

Laravel uses the solid, tested components of the Symfony framework along with other popular packages to provide a modern framework that provides easy conventions, utilizes modern programming patterns and makes development a breeze.

Laravel has changed my life. The best framework to quickly turn an idea into product.

Laravel reignited my passion for code, reinforced my understanding of MVC, and made development fun again!

Laravel kept me from leaving PHP. 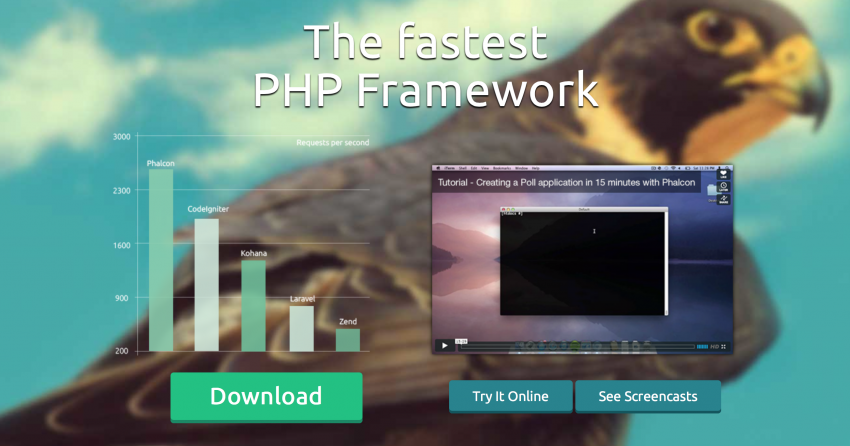 Phalcon is the fastest framework on the list. Built on C, but offered as PHP extension, it offers no compromise speed wise. It offers high performance and lower resource usage. There’s no need to learn or use the C Language, as the functionality is exposed as PHP classes ready to use. By creating a rich, fully featured framework written entirely in C and packaged as a PHP extension, Phalcon is able to save processor time and boost overall performance.

Symfony is a PHP framework for web projects. It speed up the creation and maintenance of your PHP web applications. Replace the repetitive coding tasks by power, control and pleasure.

Symfony is a set of reusable PHP components and a PHP framework for web projects. It is well documented, it is free under MIT license, and it is getting more and more popular every day. Drupal, one of the most popular CMS systems, as well as phpBB, one of the most used discussion board system, use symfony.

The is powerful, scalable and flexible. Yet it is considered by many, especially those new to frameworks, to have a very steep learning curve.

However, if you have grasped the fundamentals of PHP and HTML, have a basic understanding of modern web site development (in particular, Pretty URIs, MVC), and know how to CRUD a database/table, you are not far from developing a fairly good website, be it for your personal usage or business application. 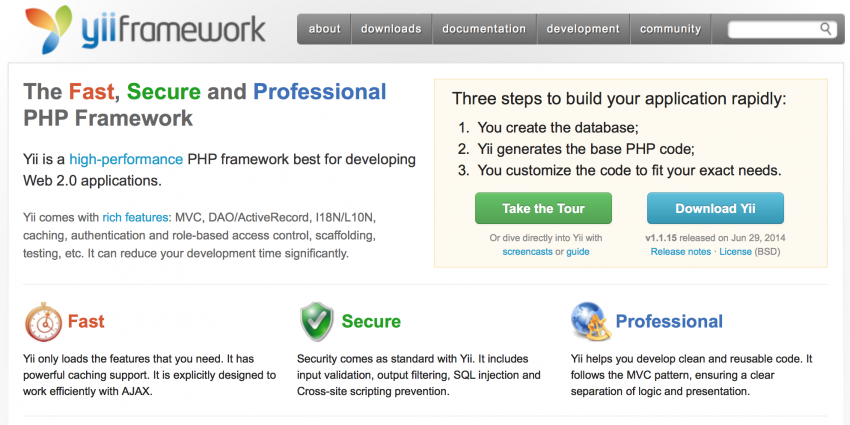 Yii Framework met all our needs! It worked equally good for both rapid prototyping and large scale web applications. It allowed us to focus on our unique idea while still offering the flexibility to bend our application in all directions we want.

Yii is a simple but very powerful application framework with a very short learning curve. Its component-based design allows us to customize it for our needs without directly modifying it — maintaining upgradability. It’s amazing how we were able to use it not just on our main app and our API, but also on our daemons!

CodeIgniter is a proven, agile and open PHP web application framework with a small footprint. It is powering the next generation of web applications.

CodeIgniter is a powerful PHP framework with a very small footprint, built for PHP coders who need a simple and elegant toolkit to create full-featured web applications. If you’re a developer who lives in the real world of shared hosting accounts and clients with deadlines, and if you’re tired of ponderously large and thoroughly undocumented frameworks, then CodeIgniter might be a good fit.

CodeIgniter is right for you if: 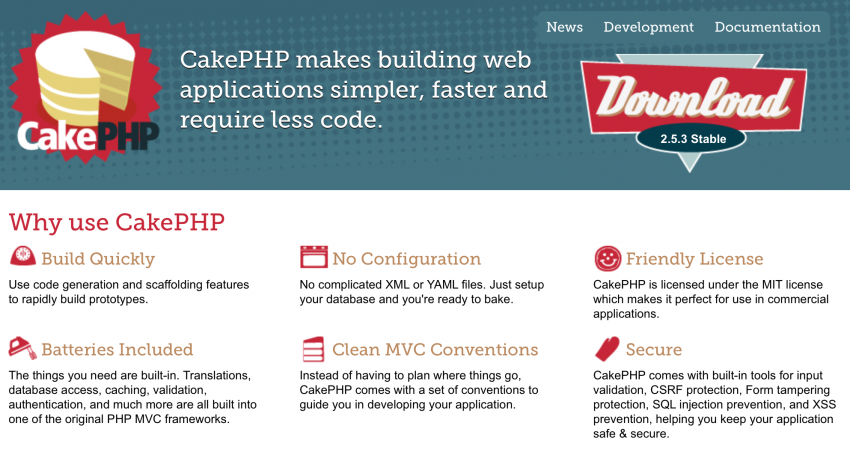 CakePHP is one of the frameworks to follow in 2014. They are about to release a stable version 3.0 to the public. CakePHP makes building web applications easier, faster, and requires less code. It enabled to use code generation and scaffolding features to rapidly build prototypes. No additional XML or YAML file configuration is required, just setup your database and you are ready to bake. CakePHP is licensed under the MIT license which makes it perfect for use in common applications. The things you need are built-in: translations, database access, caching, validation, authentication, and much more are all built into one of the original PHP MVC frameworks. CakePHP comes with built-in tools for input validation, CSRF protection, Form tampering protection, SQL injection prevention and XSS prevention, helping you keep your application safe and secure.

I’ve used Zend Framework 1 and 2 in large scale enterprise projects for years. It has been one of the leading PHP frameworks with flexible architecture suitable for modern web applications for years. Recently I have switched over to a couple of newborn frameworks, but that is my personal preference.

Zend framework is designed with simplicity in mind. It is lightweight, easily customizable, and focused on most common needed functionality. It is built to dramatically ease the learning curve you must climb when adapting to a new framework. It is widely used, so quite well tested and safe.

Despite all the advantages, it is has quite different user experiences over the years. Some users call it “extremely complicated, the worst I have known so far”.

Extremely complicated framework, the worst that I have known so far (I have worked with symfony, Yii and django; all them are easier to learn)

Great framework with a great community and a lot of tutorials…nearly everything is good, just the speed could be better.

ZF is overly complicated. At some point you will find yourself struggling with it just to make things done. Syntax is too lengthy.
I’d say ZF is a great PHP class library but an awful web framework. 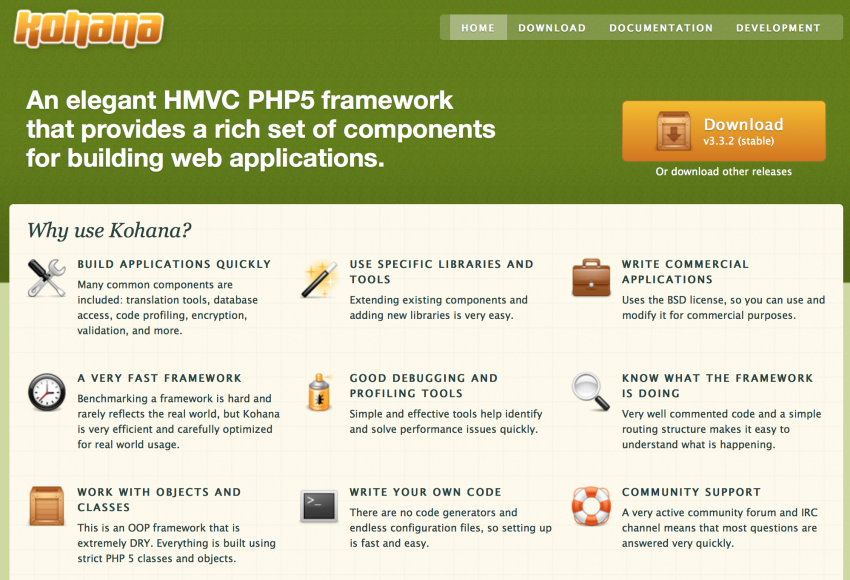 Kohana is an elegant PHP framework with a rich set of features for building web applications. It allows to build web applications quickly, as it has many common components included, as translation tools, database access, code profiling, encryption, validation, and more. It also has good debugging and profiling tools which helps to solve any occurring problems, which often is very time-consuming without the right tools.

Kohana is built to be a very fast PHP framework, carefully optimized for real world usage. However, some of the tests shown that it is slower than CodeIgniter, and some other major players on the list. But in general, it scores very well on benchmarks.

This is an OOP framework that is very dry. Everything is build using strict PHP 5 classes and objects. This shows that Kohana is sticking to the very best of PHP new features and is closely optimizing its core code.

Fuel is a simple, flexible, community driven PHP 5.3+ framework, based on the best ideas of other frameworks. It is currently releasing version 2 of the project, currently in beta stage.

FuelPHP is a MVC (Model-View-Controller) framework that was designed from the ground up to have full support for HMVC as part of its architecture. But we didn’t stop there, we also added ViewModels (also known as presentation models) into the mix which give you the option to add a powerful layer between the Controller and the View.

FuelPHP also supports a more router based approach where you might route directly to a closure which deals with the input uri, making the closure the controller and giving it control of further execution.

Silex is the PHP micro-framework based on the Symfony2 Components.

Silex is a PHP micro-framework for PHP 5.3. It is built on the shoulders of Symfony2 and Pimple and also inspired by sinatra.

A microframework provides the guts for building simple single-file apps. Silex aims to be:

Concise: Silex exposes an intuitive and concise API that is fun to use.
Extensible: Silex has an extension system based around the Pimple micro service-container that makes it even easier to tie in third-party libraries.
Testable: Silex uses Symfony2’s HttpKernel which abstracts request and response. This makes it very easy to test apps and the framework itself. It also respects the HTTP specification and encourages its proper use.

There are many assumptions around performance of different PHP frameworks. I frequently hear strong opinions about superiority X over Y in this context. There are companies writing new PHP frameworks from scratch because available solutions are too slow for them. Let’s see what the number are telling.

Performing a representative benchmark across different framework is not an easy task. There are multiple ways to use each of them. Every use case will give different reading. Lets take routing as an example. Zend Framework 1 by default doesn’t need a routing file. It’s happy to use “/controller/action” pattern. On the other hand Symfony2 comes with a routing configuration. The file has to be read and parsed. That obviously takes some additional CPU cycles but does it mean Symfony2 routing is slower then Zend Framework 1? The answer is (obviously) no.

Systemarchitect has benchmarked “quick start” projects. That gives some idea on what is the base line for every framework and makes it possible to reproduce my tests (and argue against them).
Code was hosted on Amazon EC2 medium instance. I installed PHP-APC to avoid disk access and code parsing. I also made sure there is no I/O on Apache2 or application level. I set logs and cache paths to “/dev/shm/”. I tweaked projects to make them return roughly the same amount of data (10KB). All virtual hosts had the same mod_rewrite rules. AllowOveride was set to None.

Requests per second from Apache Benchmark with c=20 and n=500. 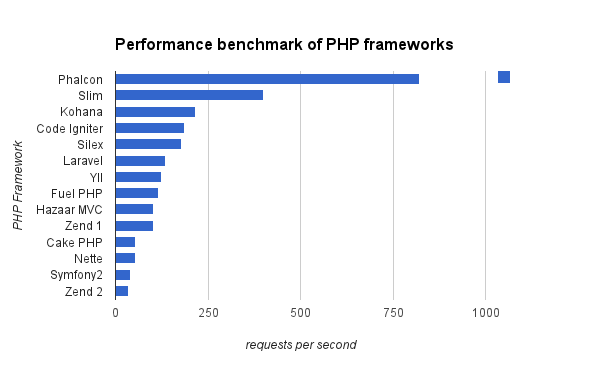 Based on Systemarchitect’s benchmark, I’m not surprised, Phalcon is beating everyone on the list, as well as seeing Slim to be the second fastest because it’s a micro framework. The Quick Start project didn’t use any templates or layout which obviously contributed to the reading. Zend Framework 1 is twice faster than Symfony2 and Zend Framework 2 but in my experience the number will quickly go down in a real live setup.

Frameworks should speed up development, performance is a secondary concern. Zend Framework 2 and Symfony2 could do better but it’s not bad. There are ways to improve those numbers on production servers. Don’t reinvent the wheel, learn and use frameworks. There are various options which balance between performance and features.

Summarizing the list, we think that the best 5 PHP Frameworks currently are: Laravel, Phalcon, Symfony2, CodeIgniter and Yii.

The same is shown by the recent study at Sitepoint, showing Laravel having over 25% of the popularity votes, Phalcon almost 17%, Symfony2 over 10%, CodeIgniter and Yii having 7.62%. 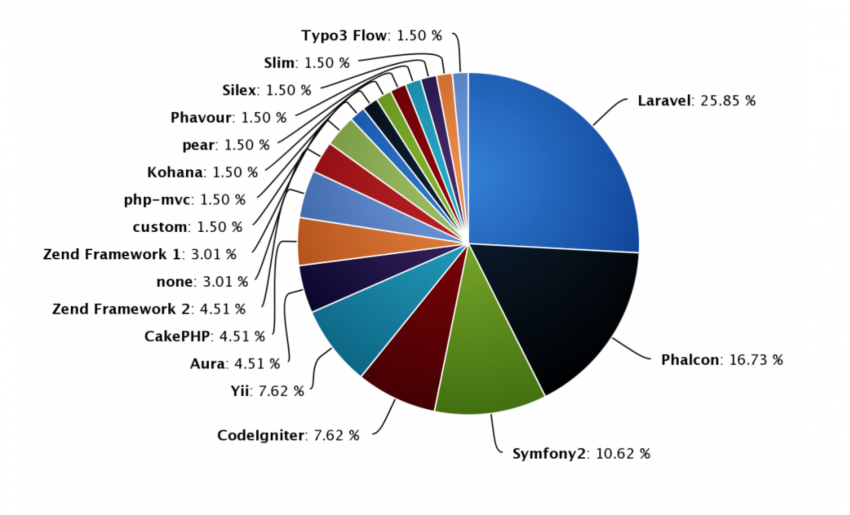 But we understand that a PHP framework is more of a preference for the web developer and that in the market today there are many strong products.